North Shore Dad
Home Archives Subscribe
I Am White.
Is That A Banana In Mitt Romney's Pocket?

Sperm Are People Too! 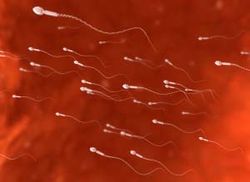 In South Dakota women must attend a lecture at a “pregnancy crisis” center which are actually anti-choice, anti-contraception facilities and must wait a first ever 72 hours before being allowed to have an abortion.

Arizona passed a law that imposes criminal penalties on doctors who perform abortions with the knowledge that the race or sex of the fetus is a factor in the decision to abort.

In Ohio there is a bill that would outlaw any abortion after a detectable heartbeat can be found which is normally around six weeks.

A Texas bill would require doctors to provide women with a sonogram of the fetus and to hear the heartbeat before performing an abortion.  Women would be allowed to close their eyes and cover their ears.  Victims of rape or incest would not be exempt.

In Kansas and Idaho there are proposals to ban abortions after 20 weeks on the claim that this is when a fetus can first experience pain, even though the American Congress of Obstetricians and Gynecologists says that there is no evidence of this.  The Kansas bill will also require doctors to tell women that abortions increase their risk of breast cancer, “a controversial theory that the World Health Organization, the National Cancer Institute and gynecological groups in the United States and the United Kingdom have said is incorrect,” according to an article in the Huffington Post.

Virginia just passed a bill that requires internal ultrasounds before performing abortions, or basically forcing a women to be penetrated without her consent, thereby raping her,  in order to show women what they are about to abort.

A bill in Georgia would force a woman to carry a fetus past 20 weeks even if it is dead, regardless of the health of the women or any other fetus that may be alive in the womb as well.

Now I don’t want to point fingers here or make this strictly a political issue but it is kind of too late for that since all of these laws or bills have been a result of Republican law makers putting their own religious values before the rights and health of women in this county.  They don’t care if woman dies because a dead fetus is in her body, or if a girl is pregnant because she was raped by her father.  And to use tactics of intimidation to guilt women into not going through with an abortion is frankly despicable.  Republican law makers have shown time and time again that the health rights of women in this country simply do not matter to them as much as their religious beliefs do.  This has been shown in everything from the Religious Republican Tea Party war on contraception, to their attempts to repeal the Affordable Health Care Act or what they refer to as ObamaCare, a term that I could not be happier with.  Any time they want to use the words Obama and Care together is just fine by me.

If Republican law makers had their way in this country, abortions, including those from rape or incest would be illegal, women would pay more for health insurance then men simply because women use doctors more often than men do.  Women’s preventive health screenings, including mammograms, and cervical cancer screening, would no longer be free.  Provisions in ObamaCare for mothers who are breast feeding, including break time to pump or breast feed as well as a clean place to do so other than a bathroom would be eliminated.  Birth control pills would not be covered by insurance companies, even though women use birth control for many things other than birth control, including regulating cycles, controlling ovarian cysts, even eliminating allergic reactions to progesterone.  It has been proven time and time again that it is less expensive for insurance companies to provide women with birth control pills then it is to pay for everything from delivery, to the ongoing cost of unwanted pregnancies,  to treatments for cancer, and so on. The insurance companies have no problem with free contraception for women, it’s the Republican religious law makers who do, and most of them are men.

But where does Mitt Romeny and Paul Ryan stand on womens health issues?  Well Mitt Romeny has been very clear on where he stands.  He has pledged to roll back ObamaCare and take away all of the benefits that this legislation provides women.  He has pledged to defund Planned Parenthood even though the majority of their services have nothing to do with abortions and it is currently illegal for Planned Parenthood to take federal money for abortions.  And on the question of free contraception, he said, if you want free stuff, “vote for the other guy.”  I plan to.  As far as Paul Ryans’s views go, Mr. Ryan co-sponcered the Protect Life Act in 2011 which would allow hospitals to refuse to provide referrals for abortion if the facility does not provide abortion services, effectvly allowing a women who requires an abortion to save her life to die on the floor.  I am normally pretty tolerant of other people’s views, but letting a women die becuse your religious convictions trumps saving a womens life is basically bat-shit crazy!

Lastly let’s put this all into some perspective.  Many Republican law makers in states including Florida, Virginia, Arizona, South Dakota and Texas, put so much time and effort into pushing through legislations to harass and intimidate both women who want or need an abortion, sometimes for health reasons, and doctors who perform these services, and who have joined with religious leaders to restrict the rights of women to have basic health services such as screenings and contraception provided to them free of charge, are the same Republican law makers who refuse to put any restrictions on the sale of hand guns to any person regardless of their mental capacity or criminal record.  They will let any individual, no questions asked walk onto a gun show and with no background check of any kind, walk out with as many lethal weapons as they can carry, weapons that have been leaked to terrorist attacks, Mexican drug cartels, gang activity, and even school shootings.  Apparently to them, killing people before they are born is a no no, but after they are born is just fine.   Women in this country deserve better then to be given less consideration then an insane criminal at a no-questions-asked gun show.  If it were men facing these health issues, there would be no issues. No one is asking men to pay a co-pay on a prostate exam or forcing them to watch a prostate being removed.

To declare that life begins with spermatogenesis, as I did earlier, may seem a bit over the top but the Wilmington Delaware City Council doesn’t think so. They recently passed a resolution by a vote of 8 to 4 that states, “Each 'egg person' and each 'sperm person' should be deemed equal in the eyes of the government and be subject to the same laws and regulations as any other dependent minor and be protected against abuse, neglect or abandonment by the parent or guardian…laws should be enacted by all legislative bodies in the United States to promote equal representation, and should potentially include laws in defense of 'personhood,' forbidding every man from destroying his semen.”  You see, be careful what you ask for. Apparently sperm are people too.