Is That A Banana In Mitt Romney's Pocket?

So you and Donald Trump stop at a fruit stand to buy a bunch of bananas.  I know what you are thinking but this is not the beginning of a bad joke.  And we all know that when Donald Trump wants a banana he tells one of his birther investigators to take a break from tracking down evidence that the President is Kenyan and go pick one from the Trump International banana garden located on the top of Trump Towers in Manhattan.  Anyway, like I was saying, you and Donald Trump stop at, oh let’s call it the “Fox” Fruit Stand, to buy a bunch of bananas.  When you go to pay, the cashier tells you that your bananas are $3.00 but with tax your bananas will be $3.50. Next The Donald goes to pay for his bananas with his Gold Amex card made of actual solid gold from his baby seal skin wallet.  The cashier tells Mr. Trump that his bananas with tax will only cost The Donald $3.17!  You go, wait! I just paid $3.50 for the same bananas that Mr. Apprentice here is only paying $3.17 for!  What’s the deal?  And the cashier tells you that although Mr. Trump makes so much more than you, and can easily afford to pay the same in taxes, and could actually afford to pay more, his immense wealth actually classifies him as a “Job Creator”, so he gets a ridiculously disproportional break in taxes so that he can take his 33 cents in tax savings and invest it in building more hotels, hiring thousands of employees, and thereby save the economy (commonly known as trickle-down-economics). You then tell the fruit stand owner that this simply does not seem “fair or balanced” and from now on you will be buying your bananas from the Jon Stewart Fruit Market across the street.  It’s at that time you notice that Mr. Trump has invested his 33 cents in a bamboo back scratcher so that he can pamper himself. 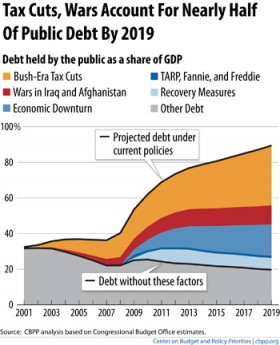 And that right there is why giving enormous tax breaks to the rich does nothing to create jobs.  Instead of investing in new American made bamboo back scratcher factories that hire hundreds of well paid American workers who can then contribute fiscally to our economy by buying goods and services, the ultra rich invest their huge tax savings in things to make their own lives better like cars, boats, houses, off shore tax shelters, and occasionally back scratchers.  The truth is tax breaks for the wealthy do not create jobs, do nothing positive for the economy, and make no one any better off financially, except for the Donald Trumps and Mitt Romneys of this world.  And yet Mitt Romney and the Republicans want you to believe that making rich people richer will somehow make the rest of us richer as well.  I’m sorry but it just doesn’t work that way.  You see when the ultra rich get ultra tax breaks they keep that money for themselves, and instead of using those billions in savings to increase the salaries of their workers, or putting it into research and innovation, or opening factories to create new jobs, they do the types of things that Candidate Romney does like quadrupling the size of his summer home in California or flying his dressage horse to competitions.  So are we to expect that if Mitt Romney, who incidentally according to Forbes magazine is worth an estimated $230 Million dollars which would make him the richest American president in history, were to actually become president that his allegiance would not be to the other multi-millionaires, billionaires and mega-corporations that he knows as friends and colleagues, and would instead make his focus lifting up all those average Americans who so badly need tax breaks, affordable health care, and a dependable paycheck.  Are we to believe that he would abandon the demands of the Tea Party Republicans, and provide meaningful reform to immigration, support gender equality in marriage, push for equal pay for women, support the people’s right to bargain as a union for the pay and benefits they deserve, and increase taxes on the wealthy in order to reduce the deficit?  Or would “President” Romney not only keep the Bush tax breaks but instead actually increase the Bush Tax Breaks, that incidentally to this very day are still the single driving factor keeping our National Debt where it is today, not President Obama’s bailout of the Auto Industry, or “Obamacare” which actually increased business for private insurance companies, or the stimulus package that saved millions of jobs, or any other false claim that Mitt Romney or the GOP wants to make.  Here is a sobering dose of reality.  The Bush tax cuts combined with two unpaid wars in Iraq and Afghanistan,  that the Washington Post estimated in 2008 cost us over 3 trillion dollars, not including the ongoing cost to treat the wounded and the interest to be paid, (this was the first time in history that we cut taxes at the same time we went to war, forcing us to borrow the entire amount to pay for both wars from China) was the single largest factor in not only blowing up our deficit from 6.4 trillion in 2003 to over 10 trillion in 2008, but also in eliminating the surplus we accumulated under President Clinton. That is right. There was no deficit before George W. Bush entered office.  We had a surplus.

Mitt Romney wants to cut the top tax rate from the already low 33% to 28%.  The only effect this will have is to increase our deficit even more and make the rich even richer. He wants to cut the Corporate Tax rate from 28% to 25% and eliminate all taxes on foreign earnings that currently exist.   Neither of these proposals even take into account all of the tax loop holes that allow some corporations to pay zero taxes already and some individuals to pay income taxes as low as 12%. He wants to raise the eligibility for Medicare, forcing millions of aging Americans to pay for health insurance they already can’t afford, and raise the retirement beyond 65.   And he has yet to show us how all of this will benefit anyone except those like himself, corporations like Bain Capital, and the Donald Trumps of this nation.  Mitt Romney is absolutely a man of the people…people like him.

President Obama’s responsibility in all of this is simply to do everything in his power to dig us out of the hole that President Bush’s disastrous economic policies left for us.  But President Obama is not our king.  He does not have supreme rule over our land.  He cannot unilaterally make laws without the cooperation of a House and a Senate and a Supreme Court to make change happen in this country.  In some situations he can enact executive orders where he has the authority to do so.  But only so much progress, only so much change, only so much economic recovery can happen if you are constantly fighting a uphill battle of non-cooperation.  And even if the President did have the full support of congress in passing the bills that he put forth, it would still take much more than four years to recover from the mess that George Bush left us.  But I will tell you what the solution is not. It is not going back to the economic policies that got us in this mess in the first place, and it is most certainly not going beyond those disastrous policies to put us even further in a hole that as of today will take us many years far beyond this, the next, or even the next administration, before we see anything even resembling a full economic recovery.   And if we let a Mitt Romney, a man who has no ones interests at heart, except himself, other like him, and the corporations he answers to, we will all be left with nothing except a bunch overpriced bananas.