Discovering Who You Should Vote For, Getting Past the Politics 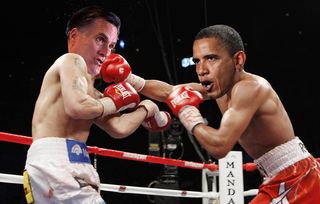 I have to admit something.  I hate politics.  Now you may find that a bit surprising coming from someone who won’t shut up about it, but quite frankly, I wish this whole thing was over, Obama is declared the winner already, and the Republicans could return to rolling women’s rights back to the 1950’s and taking away all our Obamacare.  But seriously, I don’t want to get political here, because remember, I hate politics.  And that really is the whole point of this article.  You see, the real problem with electing someone for president is that there is way too much politics involved.  I know that sounds a bit crazy because after all isn't this whole thing about politics? Well yes and no. In past elections it often was hard enough to get past the sound bites and the political ads, but at least ads of the past had to end with the candidate stating, “I’m Brian Dann, and I support this message.” Ok seriously that is scary.  If you EVER hear that at the end of an ad, slip me two roofies, plant some cocaine in my glove compartment, and post pictures of me on Facebook dressed like Dr. Frank N Furter with two crack whores in a room at a Red Roof Inn, because I’ve obviously lost my mind!  Anyway…today it takes real work, real effort to sort past all the ridiculous sound bites from the media, from pundits, and from the one thing that has been the most destructive to this political system, ads funded by SuperPACs, and really figure out what each candidate stands for, and who you most align with.  Now before I go on I am going to assume that you have no idea what a SuperPAC is because most people do not.  According to OpenSecrets.org,  SuperPACs are:

“…a new kind of political action committee created in July 2010 following the outcome of a federal court case known as SpeechNow.org v. Federal Election Commission.
Technically known as independent expenditure-only committees, Super PACs may raise unlimited sums of money from corporations, unions, associations and individuals, then spend unlimited sums to overtly advocate for or against political candidates. Super PACs must, however, report their donors to the Federal Election Commission on a monthly or quarterly basis -- the Super PAC's choice -- as a traditional PAC would. Unlike traditional PACs, Super PACs are prohibited from donating money directly to political candidates.”

Yea, I know…Bla,Bla,Bla…what that really means is that millionaires and billionaires can now donate as much money as they desire, to a fund, or "SuperPAC" that “legally” has NO connection at all to any particular candidate(yea, right), and then can spend as much as they desire, to create ads that do not have to contain even a shred of truth, for the sole purpose of making the opponent appear to be an America hating Nigerian who wants to take all your guns, socialize your health care, and make Islam the official religion of the U.S.A…hypothetically…for example.  Since “legally” the candidate has NO connection to the SuperPAC (yea, right) and the ad is not funded by the candidate (yea, right), he or she no longer has to say “I, (insert name here), support this message.” “Legally” candidates are not affiliated with those paying for the ad or the SuperPAC, and unlike previous elections where individuals and corporations were caped as to how much they could donate directly to an individual candidate, that is not the case with SuperPACs, so candidates, their supporting parties, and the SuperPACs can spend as much as they want to and effectively “buy” elections thereby destroying our system of democracy as we once knew it.  Thank you Supreme Court.

All this is great for the individuals and corporations that are funding the SuperPACs because there goal is for all of us to be mindless drones absorbing whatever Republican or Democratic Koolaid they feed to us, never questioning the truth or validity of their message and hoping that they outspend their opponent to the point that we just buy into whatever garbage we are hearing the most.  They are counting on the fact that most people just do not take the time to determine if what they hear in a political ad or on a “Fair and Balanced” news show is really accurate.  You see, I don’t have to say who I support.  If you know me or have read anything I have written, you know exactly where I stand, but what you don’t know is the reason I stand where I stand.  I stand where I stand because after I hear the ads, after I hear the pundits and listen to the speeches, I do the research.  I find out what is true and what is not.  I educate myself on the issues and then form my own opinion based the facts that I discover.  I remove the lies, the propaganda, the politics and the SuperPACs from the equation and look to see who out there is most like me and what I believe in.  Then deciding who to vote for, what party to support is a no brainer because my decision is not influenced by them, by the SuperPACs, by the talking points, it is determined by me.  It is up to all of us, before we cast our vote to go beyond the ads and the speeches, the pundits and the politicians, and to educate ourselves on the issues, to hold our politicians and those supporting them with unheard of amounts of money accountable for their claims, and to find out, regardless of how we feel personally about the candidate if their positions on the key issues match our own.  Then and only then will we be able to be certain that the person you are voting for is the person who is best for you and for this country.

There are many places on the internet where you can find information on the issues and where the candidates stand on them.  Here are just a few.

Use these first two sites to take a quiz that will tell you whose views most match your owns:
http://www.votesmart.org
http://2012election.procon.org/view.resource.php?resourceID=004491

See where the candidates stand on 61 important issues:
http://2012election.procon.org/view.source-summary-chart.php?topic=64

How much money has each SuperPAC raised and who do they support:
http://www.opensecrets.org/pacs/superpacs.php

How much money has each candidate raised?
http://www.opensecrets.org/pres12/index.php

Top 12 Slogans For The Romney-Ryan Campaign

1.  Don’t Worry, It Will Trickle Down Eventually.

5.  If Hair Were Electoral Votes, We’d Have This Thing In the Bag.

6.  The Poor Can Suck Our Rich White Dicks!

7.  At least I Didn’t Pick an Insane Hockey Mom From Alaska.

9.  Fighting For You, and By You I Mean People Like Me.

10.  The Best The Republican Party Could Come Up With.