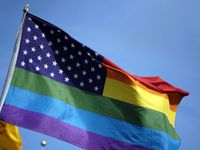 In 1778 Thomas Jefferson proposed that any man who commits the crime of sodomy receive the punishment of castration, and any women receive the punishment of having a hole cut in the cartilage of her nose of at least one half inch in diameter.  But that’s not the messed up part.  At the time the most common penalty on the books was death. Jefferson was actually a Liberal. During The Holocaust about 50,000 homosexuals were sentenced to death by the Nazis.  There pink triangles that marked them as homosexuals were often used for target practice.  In the United States during the 1930s many in the psychiatric community classified homosexuality as a disease and treated it with such things as castration, lobotomies, pubic nerve surgery, and electroshock treatment.  Homosexuality was actually not decriminalized in the United States until 1961 by the state of Illinois. It took eight more years for another state to follow suit and it was not until 2003 that the remaining 14 states that still classified homosexuality as illegal was forced to take those laws off their books by the Supreme Court case of Lawrence vs. Texas.  That is right, 2003. We like to think that we live in a time that laws like this couldn’t possibly exist but in our life time they did, and in our life time they still do.  In this country we still legislate who can and cannot get married.  Just like in 1778, 1961, and 2003, we have existing laws on our books that put homosexuals in a class below the rest of the population and just like in those times we have politicians and advocacy groups that support these discriminating practices against homosexuals.   And to add insult to injury we have a Presidential candidate who has promised that he will “champion a Federal Marriage Amendment to the Constitution defining marriage as between one man and one woman.”  This quote is directly from Mitt Romney’s campaign web site under the category of Values.

Civil rights never happen overnight.  When Lincoln freed the slaves they were still considered far from equal and it took decades for laws to be passed that gave black people the same exact rights according to the law that white people took for granted.  At one time it was unheard of for a black person to be able to vote in this country and today we have a black man as our President.  And today that President has done what no other leader of this country has had the guts to do. He declared that same sex marriage should be legal in all states in this country, as opposed to being made illegal by a constitutional amendment.  He did this in a country that at one time sentenced homosexuals to death.  And he did this at a time not when he had his re-election in the bag but at a time when making that declaration could had very well cost him his re-election. This president showed this country what it meant to be a leader, to commit to a cause regardless of the outcome, and he has shown all of us what it means to commit ourselves to the cause of equality for all, not unlike Rosa Parks who refused to sit in the back of the bus regardless of the personal consequences.

In this election there are very few make it or break it issues for me but one of my top ones is the issue of equality for all, and that equality extends not just to homosexuals but to all persons whether it is the equal rights of women in the workforce, the equal rights for women to affordable reproductive care, the rights of all people in this country regardless of income to affordable health care, the right of all people to an excellent education, and the rights of homosexuals to marry.  I simply cannot vote for any candidate, Republican or Democrat, who supports any form of legalized discrimination.  If we as a nation choose the unthinkable, to elect Mitt Romney as our next President, a man who has publicly stated that he will “champion a Federal Marriage Amendment to the Constitution defining marriage as between one man and one woman,” (MittRomney.com) we will be choosing to go backwards with all our civil rights.  We will be choosing to support legalized discrimination in this country.  We will be showing the world that we are no better now than we were in 1778 when the most common sentence for sodomy was death.  And if you want to justify bigotry with quoting Jesus, quote this, “There is neither Jew nor Gentile, neither slave nor free, nor is there male and female, for you are all one in Christ Jesus.” - Galatians 3:28.

Mitt Romney on his opposition to same sex marriage, December 9 2011.

For more on Marriage Equality go to WeGiveADamn.org.