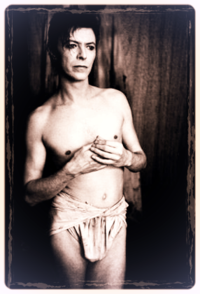 David Bowie was an artist. He was not defined by a time. He was not defined by an era. He was not defined by a style. David Bowie was style. He was timeless, he was original, he was unique, and no one could copy him or even come close to the level of “cool” that was Bowie. His concert performances were iconic and pushed the levels of performance and showmanship to the edge and then blew that edge to pieces. I had the privilege of seeing Bowie in concert on three individual occasions and each one was more incredible then the next. A Bowie concert was like a rock show, with the theatrics of a Broadway musical, and the artistry and precision of Cirque Du Soleil all wrapped up in one fantastic package. My first time seeing Bowie was not in concert, but it was on a stage. In the summer of 1980 I found out that David Bowie was coming to the Blackstone Theater in Chicago. He was playing the lead role as Joseph Merrick in The Elephant Man. I had been aware of Joseph Merrick because for some reason my parents had this book with photos of human oddities in it, and Joseph Merrick was in it along with the first documented Siamese twins, and some man with elastic skin, along with other photos from around the turn of the 19th century of people who, by today's standard, were given entirely inappropriate nick names, that at the time probably played well at Circus freak shows, but today would be considered insulting at best. I found Joseph Merrick’s photo and story fascinating, and probably at first for the same reason people at the time were fascinated by him. He was shocking to look at. I was never really a reader and I still am not but the book, “The Elephant Man” was one of the few books I had read as a young boy. I found his story fascinating, and learned what an incredible person Joseph Merrick really was. If you have not seen the movie, or read the book, you should. So when I found out that the Broadway play The Elephant Man was coming to the Blackstone Theater in August of 1980 and David Bowie was playing the lead role of Joseph Merrick, I knew what I wanted for my 14th birthday.

When the lights came down and David Bowie first appeared on stage, people went crazy, girls screamed but Bowie remained stoic waiting for the rock star part of his existence to subside. All that Bowie was wearing was a small cloth around his abdomen. He had no shirt on, no pants, socks or shoes, just the cloth. Photos of the real Joseph Merrick appeared on a screen alongside Bowie. We could see Merrick’s unbelievable grotesque deformities that plagued him throughout his life. The actor who portrayed Frederick Treves, Merrick’s doctor, read in great detail the actual medical description of Joseph Merrick’s condition, describing every part of his body starting from his overgrown head, to his legs that were covered in tumors, leaving no part of his body without mention. He described each growth and how it affected his speech, the way he walked, or the pain he felt from holding up the weight of his enormous head. As he did this, as he described every deformity in great detail, and the effect it had on Merrick’s body, Bowie twisted and turned, changed and deformed, part by part, muscle by muscle, his face, his arms, his hips, legs, feet until he no longer was David Bowie. Before our eyes he became Joseph Merrick, his arm gnarled and bent, his ankles twisted to the point that you could only imagine the actual pain that Bowie must have been feeling to have his feet turned in the way they were. He altered his voice so that you could sense the struggle it was for Merrick to even speak at times. In short, Bowie’s transformation, right before our eyes, was nothing short of amazing. He became Joseph Merrick, and he held this transformation for close to two and a half hours.

To say Bowie’s performance was amazing is an understatement and to be able to say that I was fortunate enough to witness this live is a privilege and an experience that I will never forget. But this performance, to me, is what defines Bowie because David Bowie was so much more than a rock star. From the beginning David Bowie was a performance artist. Whether it was a concert, a movie, or The Elephant Man, David Bowie was a performer. Just as he had transformed himself, right before my eyes into Joseph Merrick, he also transformed himself in to Ziggy Stardust and The Thin White Duke, Major Tom and Aladdin Sane, Jareth the Goblin King and Nikola Tesla. He performed with everyone from Bing Crosby to Mick Jagger and created iconic music that will live on forever. And although his concerts were nothing short of amazing, I will never forget the experience of seeing him become Joseph Merrick.

Joseph Merrick loved to write letters, and every letter he wrote he ended with the same poem.

“'Tis true my form is something odd,
But blaming me is blaming God;
Could I create myself anew
I would not fail in pleasing you.

If I could reach from pole to pole
Or grasp the ocean with a span,
I would be measured by the soul;
The mind's the standard of the man.” – Joseph Merrick

David Bowie as John Merrick in the Elephant Man, 1980.

Note: Frederick Travis changed the name of Joseph Merrick to John Merrick in his memoirs of the Elephant Man.  The name John was used not only in his book but also in the play and movie.