I’ve decided that no matter how much I like Bernie Sanders, he does a real piss poor job of explaining Single Payer Health Insurance. So I will give it a try. 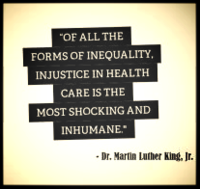 Imagine for a moment that you get sick, break your leg, get a cold, whatever, and you have to go to the doctor.  Now imagine that you are unemployed, can’t afford cobra, or you are one of the millions of Americans, who even with Obamacare, can't afford to buy health insurance.  What do you do?  You can go to an emergency room and wait hours and hours, but if you can’t afford insurance how will you afford hospital fees, cat scans, prescription costs, and medical bills?  Would you even go? Many don’t and because of this many die. Now imagine that you have a job, you have Obamacare or a group health plan, and you or a family member comes down with a catastrophic illness or accident.  You have medical costs that in one year exceed $100,000, your insurance will only pay 80% or your costs.  After insurance you owe over $20,000 on top of the five to ten thousand dollars in premiums you’ve paid this year, and you don’t have it.  You are forced into bankruptcy and lose your home to foreclosure, even though you have group medical insurance or Obamacare. These scenarios happen every day to millions and millions of Americans because of the for-profit, health care insurance system in this country.  It is estimated that even with the Affordable Care act or Obamacare, around 29,000,000 Americans are still without health insurance, millions more are underinsured, and thousands of Americans die every year because of lack of health insurance.  We are the only industrialized nation where this occurs.

Now imagine, you or a family member gets sick.  Imagine you could choose to go to any privately owned medical practice or hospital you wish.  Imagine that you don’t have to worry about paying a single medical bill or even a co-pay for you or anyone in your family because your insurance pays it all, 100%.  Imagine that your insurance stays with you from job to job and even if you are unemployed or retired. Imagine that you have guaranteed health insurance coverage, from the day you are born until the day you pass on.   Now imagine that this insurance is provided to you as a guaranteed right as a U.S. citizen.  This is what is known as Single-Payer Health Insurance.

Let’s clear something up right from the start.  Single-Payer Health Insurance is NOT Socialized Healthcare.  Socialized healthcare is when the hospitals and doctors offices are owned and run by the government.  The doctors and nurses are government employees.  Their paychecks come from the government. This is what VA Hospitals are.  This is what England has.  Not a single Senator, Congressman, or President is proposing any type of socialized health care system like England or the VA.  Single Payer Health Insurance is an insurance program, NOT health care, that is overseen by the government, and would be a right of every U.S. Citizen to have from birth to death, no matter if you are rich or poor, employed or unemployed.  This is what most industrialized nations have, except for us.  Doctors and hospitals would remain privately run entities just like they are now.  A doctor that has his or her own practice would still have his or her own practice. This would not change.  What would change is that now you or the company you work for would not have to pay an insurance premium.  You would not have a co-pay. You would not have a deductible.  You would not have to pay for prescriptions.  All of that would go away.   And any taxes  that you or the company you work for may have to pay for this guaranteed health insurance, would be thousands of dollars less then whatever you are paying right now!  And the savings would be even greater if you or a family member actually used the system because the money you would have had to put out for getting sick, doctor visits, medicine, would remain in your pocket!  In addition you would not have to worry if a doctor is in network or out of network because everyone would be in the same network.  You will not be told by an HMO that you can only see certain doctors that are in there plan.  You will be completely unrestricted as to what doctors you can go see because the same insurance will apply to all of them.  And doctors will not be over run with paper work, because they will no longer have to fight with multiple insurance companies to cover a visit or procedure.  They will have only one insurance company to deal with which will mean less paperwork, less administrative costs, and guaranteed coverage of procedures.

In addition businesses will benefit because they will no longer have the high cost of providing insurance to their employees.  Small business will benefit because they will be able to hire employees that may have not previously come to work for them due to the lack of a group health plan.  Life expectancy and infant mortality rates will rise because every American will be able to get health care whenever they need it regardless of their employment status or income.  Homeless people will not be turned away from hospitals because they have no money.

How will this be paid for?  Well before I go into that let's put this into perspective.  Under the current system, if you have private health insurance for your family you could easily be spending $500 a month for your premium.  Then there are the cost of co-pays, deductibles, and prescriptions.  If you don’t actually get sick and never visit a doctor you are putting out at least $6000 a year.  Chances are though you will visit a doctor and someone will get sick, so most likely the cost will far exceed $6,000 a year.  If you have a group plan your monthly premiums may be less because you employer is picking up part of the tab, but the costs to visit the doctor and the deductibles and prescriptions will be just as much as the person with private insurance.

With a Single Payer Health Insurance system, that $6,000 for monthly premiums goes away.  The deductibles, the co-pays, the prescription costs, all of it goes away.  The billions of dollars that companies are paying to provide health coverage to their employees goes away.  What would replace it would be a tax, about $500 a year for families.  Yes, that is right, your yearly health insurance costs would be reduced from $6000 to $500 a year.  That’s $5500 in your pocket on average.   It could be a payroll tax, a tax to businesses, or taxes on certain items or transactions.  But these taxes would amount to thousands of dollars less per person than what we are currently paying for our monthly premiums, co-pays, deductibles, and so on.  All of the medical services would be paid for 100% by the Single Payer Health Insurance.  The average American would save thousands of dollars a year. And that savings would translate to consumer spending on things like goods and services, further boosting and strengthening our economy.  It would equal the effect of giving every U.S. citizen a substantial raise in their income, and that income boost would be felt most by the people who really need it, the poor and middle class.

The bottom line is we are the only industrialized nation that does not offer guaranteed health insurance to our citizens.  I support Single-Payer Health Insurance not because of any party affiliation, or because I lean left or right, or because of what some  Presidential candidate may be proposing.  I support it because many years ago I did what I believe everyone in this country should do.  I stopped listening to the politicians, to the talking points, to the GOP and DNC, I went online and did my research.  I looked at plain old well documented facts to determine what best would help this country, then I decided for myself, and I encourage you to do the same.  The ACA or Obamacare was a good start but it did not go far enough and it left around twenty nine million Americans without health insurance.  It also kept the burden of paying for health care insurance with those that could afford it the least.  This is one of the single most important issues that affects every American.  It affects us personally because every American deserves to have decent health care available to them, and it affects us economically because our health care system is bankrupting us and this country.  People are losing their homes and their life savings simply because they get sick.  Businesses are losing profits because of the rising costs of health insurance that they have to provide to their employees.  And the only people benefiting from all of this are the CEO’s and executives of the Insurance companies.   There should not be 29 million Americans in this country uninsured.  There should not be thousands of Americans dying each year because of lack of health insurance.  Unless you are filthy rich, most Americans are one catastrophic illness away from bankruptcy.   We all need to do something about this.  Support Single Payer Health Insurance and support candidates who will fight to make Single Payer a reality.  And if you did not understand what single payer health insurance was all about before, I hope I have been able to shed some light on the subject.  You’re welcome Bernie.

To find out more about Single Payer Health Insurance check out these links:

To find out more about Bernie Sanders proposal for a Single Payer system click HERE.